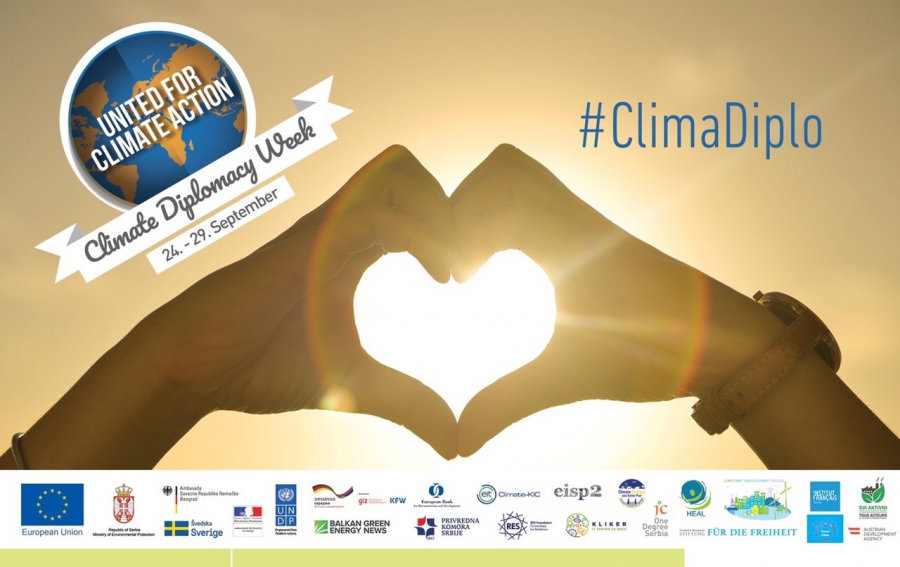 In cooperation with partners, the European Union will mark the Climate Diplomacy Week in Serbia from 24-29 September with a series of activities aimed at promoting dialogue and collaboration in the field of climate change, showcasing examples of successful practice and fostering future actions.

The events will include conferences, citizens’ debates, exhibitions, movie screenings and open-air activities participated in by a wide range of organisations and communities.

A key theme this year will be the Talanoa Dialogue – a facilitative process to take stock of the collective and individual efforts towards the goals of the Paris Agreement on climate change.

On the occasion of the launch of Climate Diplomacy Week, Head of Delegation of the European Union to Serbia, Ambassador Sem Fabrizi said:

“Climate change is real, it is happening and it’s not good. Extreme weather events, increase of temperature, displacement of entire populations, heavy air and water pollution are all putting our planet and humanity at risk.

Climate action is deeply needed: it is time to mitigate and adapt the way we use resources, our patterns of consumption and behaviour, and to work together to achieve a successful transition to a clean, low-emissions economy and resilient society.

The EU – as the global climate leader and the largest donor – will continue to work with Serbia to develop environmentally sustainable and pro-growth policies to the benefit of all its citizens.

The call for action is on each and every of us. Join us in the Climate Action during the EU Climate Diplomacy Week from 24 to 29 September that the EU Delegation is organising with the Ministry of Environment and other international partners. Join global action and participate to several activities at the Climate Village which will be on Ada Lake on 29 September: practical solutions and examples will be displayed and a Climate Bike Ride will be organised around the lake.

The Climate Diplomacy Week programme includes activities across Serbia: it kicks off on Monday 24 September in Priboj with a presentation of activities and a plan of action of the municipality to tackle GHG emissions. The same day, the EU Info Centre in Belgrade will host a forum “Climate Action – New approach to tackling negative effects of climate change” and a presentation of four innovative projects.

Activities also include discussions with pupils of the elementary school “Dragan Lukić“ and Fifth Gymnasium from Belgrade.

On Wednesday 26 September, a conference will take place on the occasion of launching a new financial programme in the area of green economy in the Western Balkans – Green Economy Financing Facility (GEFF) funded by the EBRD. The EU Info Centre will host a workshop “Adapting to climate change in priority sectors” as part of the activities of the EU project Climate Strategy and Action Plan.

Fostering partnerships with CSOs active in the area of climate change will be the topic of a consultation on Thursday 27 September, at the UN House in Belgrade.

On the last day of Climate Diplomacy Week, 29 September, the Ada Ciganlija Lake in Belgrade will host the Climate Village, an event aimed at bringing citizens closer to organisations and EU projects in the field of climate change and engaging them in a series of activities – from bicycle ride around the lake to movie screenings.

More information about the activities will be available on the EU Delegation to Serbia’s web-site – www.europa.rsand the EU Info Centre’s web-site – www.euinfo.rs, as well as on social networks under hashtags #ClimaDiplo and #United4Climate.

What is the EU doing to fight climate change?

The European Union has set ambitious targets at EU level: the EU 2030 climate and energy framework adopted in 2014 sets three key targets for the year 2030:

Few examples of EU support to Serbia in the area of climate change:

In Serbia, the European Union is helping Serbia with IPA funds (1M EUR) for analysing the current situation and drafting the Climate Change strategy and action plan of Serbia in line with EU Climate ambitions and UN requirements.

As the best energy is the energy we don’t spend, the EU is supporting Serbia to improve its Energy Efficiency (19MEUR in IPA 2018), modernise the existing energy production units (NOx emissions reduction at Nikola Tesla 9MEUR) and support in legislation updates.