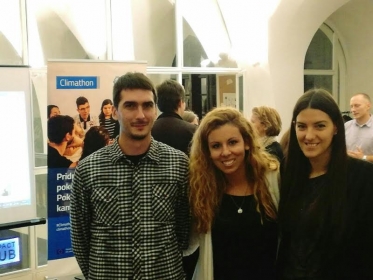 EcoDev team with Danica Dabić, Bojana Nedeljković i Boris Džakula , constituted of ecologist, tourismologist and software developer  participated in the first Climathon in Belgrade, organised by the Climate – KIC and the Serbian Chamber of Commerce. Climathon is a global 24 – hour event on the topic of climate change, which took place simultaneously in over 100 major cities around the world. The concept is that during the 24 hours teams attend lectures of the carbon footprint, business models, working on their ideas on reducing the carbon footprint, have sessions with mentors and finally present their ideas in front of the jury. Tim Ecodev promoted green jobs and worked on the idea Beo Cycle, mobile applications for the integration of information about cycling tours, stations etc, which has received positive feedback and support.

Please look at the documentary about Climate Change “Before the flood”!

You can watch it here.